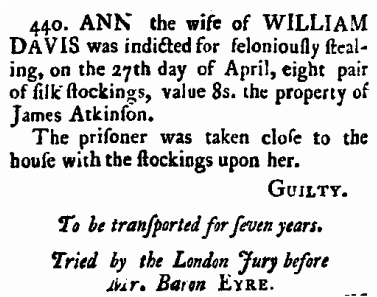 She was indicted for feloniously stealing, on the 27th day of April 1786, eight pair of silk stockings, valued at 8 shillings. Being the property of James Atkinson. The prisoner was taken close to the house with the stockings upon her. Found GUILTY. To be transported for seven years. Tried by the London Jury before Mr Baron EYRE.

The 30-year-old convict was hanged for theft at Sydney Cove. Ann was found guilty of stealing one silk waistcoat, three shirts, one cambrick handkerchief, one cheque shirt, one linen waistcoat, one old shirt from the house of convict Robert Sidaway, who co-habituated there with Mary Marshal. Davis was in the habit of calling by and smoking a pipe with them. When they were away on November 14 she gained access through a window. After upsetting a tub of water in the house, she made off with her booty; it was later found in her possession.

When the prisoner claimed to be pregnant and thus that she could not be executed, the court ordered a trial by matrons. The jury of matrons was the most important function that women performed in eighteenth century courts “On her condemnation she pleaded pregnancy, and a jury of venerable matrons was empanelled on the spot to examine and pronounce her state, which the forewoman, a grave personage between sixty and seventy years old, did by this short address to the Court “Gentlemen, She is as much with child as I am .”’ Sentence was accordingly passed, and she was executed.

Sydney Cove. Nov 23 Ann Davis has been hanged, the first woman in the colony to be “turned off” by the executioner. On 23 Nov 1789 James Freeman’s (the executioner) worst moment may have come when he killed Ann Davis. He was found drunk a week later he was punished with 100 lashes.
Minutes of court proceedings
can be found by clicking here
Back to list
© NicHume Photography 2014-2016. Please be advised that copyright is attached to all images taken by Nicole Hume. In plain English, you (or a third party) are not authorised to copy in part or in full, any image for any reason without prior consent. No editing, copying, manipulation by any form of media is authorised, and severe penalties do apply for breaches of the copyright. Please contact me if you require further clarification regarding copyright and use of images.