Shortly after 8 o'clock yesterday morning the two prisoners, Ellen Thompson and John Harrison, who were convicted at the April Criminal Sittings of the Northern Circuit Court of the murder of William Thompson (husband of the female prisoner) near Port Douglas on the 22nd October last, and who were sentenced to death by His Honour Mr. Justice Cooper, suffered the extreme penalty of the law. Some considerable time before the hour appointed for the execution, the gaol officials, and those whose various duties required their attendance to witness the fearful spectacle began to arrive, but the attendance of those whose curiosity led them to make application for passes for admission was very small. The rumours which had been current for some weeks previously respecting the almost unprecedented conduct of the female prisoner and her frequently expressed determination to resist all attempts to hang her had created a great deal of public excitement. But, although the condemned woman all along placed entire confidence in the belief that the Governor of the colony would at the last moment grant her a reprieve, her demeanour, when it was at last made clear to her that all hope was past, was anything but uproarious or unwomanly. Both she and Harrison rose at an early hour yesterday morning. Shortly after daylight the prisoner Thompson was attended by two Sisters of Mercy, whose ministrations she appeared thankful to receive, and to whom she continuously repeated her protestations of innocence of the crime for which she was about to suffer the penalty. While denouncing the Governor and the Executive for refusing to grant a commutation of her sentence, she admitted that from a legal point of view she might be guilty of the charge of murder, but urged that morally she was as innocent as an unborn babe. Her version of the tragedy was briefly that her husband and Harrison had been quarrelling, when she, with the intention of making peace between them, in a jocular spirit remarked to Harrison that if he did not shut up, the old man, meaning Thompson, would shoot him. Harrison immediately took up the revolver, saying, "Will he? Well, I will have first shot," at the same time firing. Throughout the morning Mrs. Thompson conducted herself with the greatest respect towards the Sisters of Mercy, and also towards Father Fouhy, who visited her in the last half-hour of her life. She bore up bravely to the last, and even when standing on the scaffold her fortitude was remarkable. Attended by Father Fouhy, she stepped on to the drop, and her voice was unshaken as she said, "Good-bye everybody; I forgive everybody from the bottom of my heart for anything they have wronged me in this world. I never shot my husband, and I am dying like an angel." Only once, within a few seconds of the fatal moment, was there a perceptible quiver in the unhappy creature's voice, when with almost her dying breath she murmured, "Oh, my poor children; take care of my children will you, Father". The next instant her body was swinging in mid air. Harrison, is said to have been a soldier in the British army. To Archdeacon Dawes, who was with him during his last hours, and with whose ministrations he appeared deeply impressed, he stated that both he and the woman were implicated in the death of Thompson, but that although he did fire the shots which killed him it was done in self-defence. When standing on the scaffold he spoke not a word, and in the expression of his features could be traced not the slightest evidence of fear or nervous excitement.​ 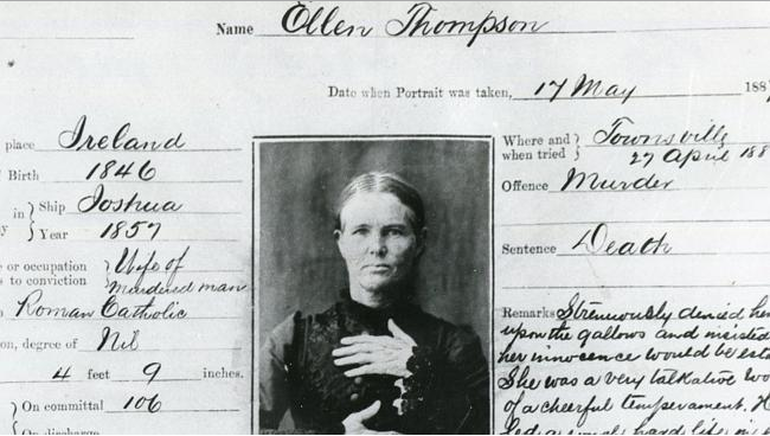