Minnie emigrated to Australia in 1887 as Francis and settled in Sydney.  She was employed in domestic service and soon became acquainted with Rudolph Knorr.  Rudi was a German immigrant working as a waiter.  He was known as a petty criminal with his speciality being a swindler.  They married on the 2nd November 1889 and moved to Melbourne.  They were blessed with the birth of Gladys in 1892 but this soon turned sour when Rudi was sent to prison in Adelaide for selling furniture on hire purchase.

This was a time of great financial depression and it was very difficult for a lone woman to make ends meet.  Francis turned her hand to dressmaking but failed.  She was finding herself almost destitute with a small child so she stole some money and made her way back to melbourne. Francis took in with one Edward Thompson whom was a fishmongers assistant.  Their union was not to last long and Francis moved yet again and found her way into 'baby farming'.

The Baby Farming racketeering was open to any woman with a child/children of her own.  She could get away with claiming to be a nurse and could take babies on a long-term basis.  The mother (usually with an illegitimate child) would pay an initial down payment of up to 20pounds and then pay a smaller monthly payment.  In return her baby would be cared for and she could visit at pre-arranged times.  Often the mother would arrive for a visit only to find that the baby farmer had vanished, her child sold to a childless couple at an exorbitant cost.  The baby farmer would normally change her name and set up business in another town or state.  During this time a commission was held where it was found that post mortems on over 500 such babies found that in over half, murder was the cause of death.  In 1893 there were 60 inquests into babies hat had been found dead or whom had died through neglect.  Many babies simply vanished without trace and were presumed to be on-sold.  With no legal binding contract in place its a wonder such atrocities occurred.

Given that this was now Francis' choice of income she moved around a lot using variations of her known names.  There were many mothers hunting Francis down wanting a word with her over their missing babies.  The mothers did not report their babies as missing as they were frightened at being exposed as a single mother with an illegitimate child.  The baby farming industry was rampant in Victoria.  So it seemed highly likely that Francis had babies in her care that she could not 're-farm' or sell that had possibly been 'disposed of'.

Rudi was released from prison and reunited with Francis and they moved to Sydney.  It was during the birth of her second child that the police came to arrest her for murder.  The police had to wait for the child to be born before they could escort Francis to Melbourne.  Little did Francis know but a tenant in one of her old residences had been gardening and found the decomposing remains of a baby girl, she still had a length of rope around her neck.  When the police arrived at the scene, neighbours let them know that the same tenant (Francis) had also lived in a nearby house.  That garden was also upturned and the remains of two baby boys were found.  Autopsy found that the cause of death for the girl was strangulation and both the boys were suffocated.

During the inquest, 33 witnesses were called and their evidence was damning.  One witness stated that Frances Knorr had uncountable dealings with unwed mothers and the swapping and re-farming of babies was so large in numbers it was hard to keep track of.  Francis was charged with three counts of murder but even with the mountain of evidence against her she pleaded her innocence, denying she murdered and buried the babies.

The knott in her noose came when a letter from Francis to Edward Thompson was intercepted.  In the letter Francis was trying to have Edward falsify evidence and have him blamed for the burials and that the children were theirs and not those of unwed mothers and that the babies had died of consumption.  If this was to be her saving grace it failed miserably.  After a five day trial a guilty verdict was delivered.  Judge Holroyd passed the mandatory death sentence.  Francis, still in denial screamed from the dock "God forgive you and your sins Ted. God help my poor mother, God help my poor babies".

It wasn't until the days leading up to her execution that she confessed her sins... 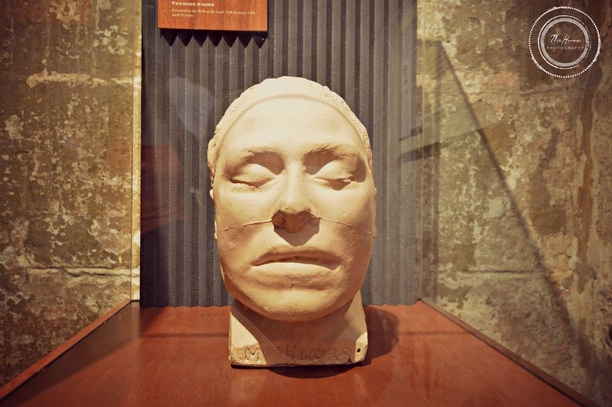 "Placed as I am now within a few hours of my death, I express a strong
desire that this statement be made public, with the hope that my fall will not
only be a warning to others, but also act as a deterrent to those who are
perhaps carrying on the same practice. I now desire to state that upon the two
charges known in evidence as number 1 and number 2 babies,
I confess to be guilty."

Francis Knorr was hanged at Old Melbourne Gaol 1000hrs on the 15th January 1894.  Before the trap door opened and she dropped seven feet, six inches to her instantaneous death she stated "I have peace, perfect peace". 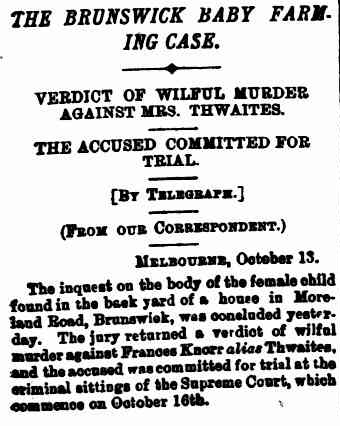 Thomas Jones was to be Francis Knorr's hangman.  With public divide over the execution of women there was tension in the Jones household.  Newspapers of the time provided scathing details of the baby murderer, yet the public knew how hard it was for lone women to survive and what lengths they had to go to just to keep themselves afloat.  Mrs Jones was outraged that her husband was to be employed to hang Francis, so outraged that she threatened to leave him if he went through with it.  The pressure became too much for Thomas and he suicided two days before the execution date.
© NicHume Photography 2014-2016. Please be advised that copyright is attached to all images taken by Nicole Hume. In plain English, you (or a third party) are not authorised to copy in part or in full, any image for any reason without prior consent. No editing, copying, manipulation by any form of media is authorised, and severe penalties do apply for breaches of the copyright. Please contact me if you require further clarification regarding copyright and use of images.