​
Elizabeth Lillian Woolcock (née Oliver) was born in 1847 at Burra. Separated from both her parents by the age of four, her childhood was characterised by poverty, neglect and sexual abuse. At 20 she married Moonta miner Thomas Woolcock, an alcoholic widower who died in 1873. An inquest found that mercury poisoning caused his death, and Elizabeth was charged with wilful murder. The evidence against her was a farrago of malicious gossip and primitive forensic pathology; there remains serious doubt about the cause of death and whether Elizabeth committed any crime. A modern court would be unlikely to find her guilty of murder, but Woolcock’s legal counsel was sadly inept, and she contributed little more to the proceedings than inarticulate snarls of defiance. The jury that convicted her recommended mercy, and there were strong public appeals for clemency because of her youth, gender and the fact that she was clearly a victim of abuse, but on the advice of Executive Council, Governor Musgrave refused to commute the sentence. The principal insight into Woolcock’s state of mind, and indeed the source for much of what we know about her life, was a rambling letter said to have been written in the presence of her Wesleyan confessor shortly before her execution. The authenticity of the document is doubtful, because it is longer and more literate than any other document she ever wrote. In it she said, ‘in an evil hour I yielded to the temptation’ and ‘Satan tempted me and I gave him [her husband] what I ought not’. Even if Woolcock actually wrote those words, they fall far short of confessing to murder. She was confident she would die ‘washed white in the precious blood of Jesus’. Hanged at Adelaide Gaol on 30 December 1873 at the age of 26, Woolcock is the only woman to have been legally executed in South Australia. Her story has inspired some books and plays.
BY PETER BELLThis entry was first published in The Wakefield companion to South Australian history edited by Wilfrid Prest, Kerrie Round and Carol Fort (Adelaide: Wakefield Press, 2001). Edited lightly.
​Uploaded 24 June 2014. 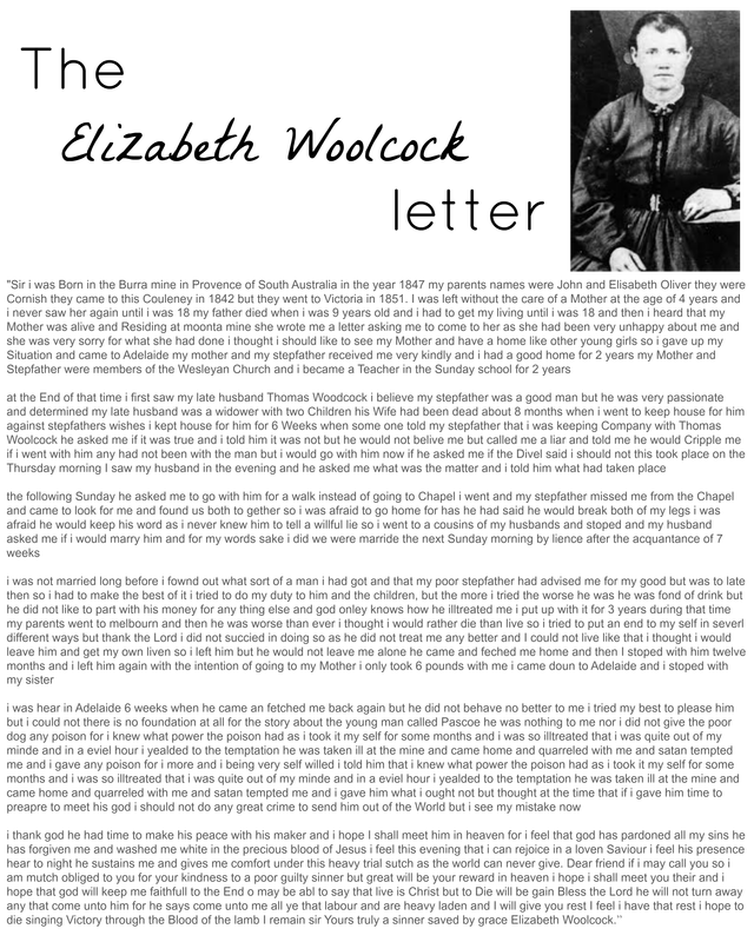