'The ears of the witness were now assailed by a loud declaration from the prisoner Rawlins, that his master had been murdered: To which Mrs Anderson replied, "that she hoped they would not suppose she had murdered her husband." ​'

'The evidence for the prosecution here closed; and the prisoners were put upon their defence; which consisted chiefly in calling witnesses to character: Here concluding, the Court retired between four and five in the afternoon; and after an hour's absence returned a verdict - Guilty, against Elizabeth Anderson and James Stock; John Rawlins acquitted, and discharged.
Sentence of death was accordingly pronounced on Elizabeth Anderson and James Stock, who were thereby doomed to be executed on such day and place as should be appointed by His Excellency the Governor and Commander in Chief; and their bodies to be afterwards given up to be dissected and anatomized.​' 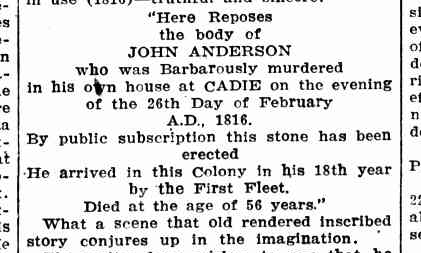