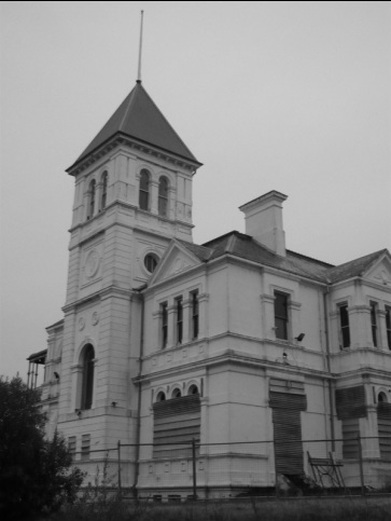 Said to be haunted by 14 year old Ray Blackstone whom drowned in a nearby damn on 15th October 1909.  His lifeless body was said to have been carried back to the house and kept in the cellar awaiting certification and burial.

In 1939, the son of then owner Arthur Adolphus Gregory died of appendicitis in the theatrette.  Again a boys body lay in wait in this house.

It is said that the presence of children can be felt throughout the house, but in the tower stands a lonely woman waiting the return of her man.

The Studley Park property has a history that goes back 200 years.  Governor Lachlan Macquarie granted the property as 2 parcels of 100 acres each to John Condron and William Parrott in 1810.  After several changes in ownership it was purchased as 1 parcel by W.C Payne in 1888 that went about building Studley Park House, so named after Studley Park near Ripon in Yorkshire, England.  In 1891, Payne was obliged to sell the property to Francis Buckle, the Architect of the house, to cover his debts.  In 1902 the property became the Camden Grammar School after it was sold to Dr Henry Oliver.  The property continued its life as a school until 1933 when the school closed and it was sold for $4,900 to Arthur Gregory, Sales Manager of Twentieth Century Fox, who went about refurbishing the house in the Art Deco style.  Gregory was a keen golfer and commissioned Eric Apperley to design a 9-hole course for Studley Park.  A further 9 holes were  later designed.

The property was acquired by the Army during WW2 at a cost of $16,000 and used as a School of Tactical Instruction.  One of its first students was Lieutenant A R Cutler who later became the Governor of NSW.  The end of the war saw a decline in the use of Studley Park and in 1951, the newly formed WRAC moved in to start their training under WO2 Patricia Rawlings.

'The History' Copied from: http://www.camdengolfclub.com.au/index.php?id=20
Further reading: http://www.camdenhistory.org.au/Studley%20Park.pdf
© NicHume Photography 2014-2016. Please be advised that copyright is attached to all images taken by Nicole Hume. In plain English, you (or a third party) are not authorised to copy in part or in full, any image for any reason without prior consent. No editing, copying, manipulation by any form of media is authorised, and severe penalties do apply for breaches of the copyright. Please contact me if you require further clarification regarding copyright and use of images.