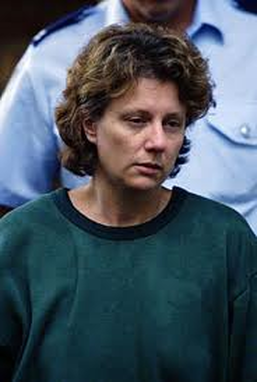 Kathleen Folbigg was born Kathleen Megan Donavan on 14th June 1967. This woman’s crimes are beyond the comprehension of any parent. Folbigg was convicted of the murder of her three infant children, eight-month-old Patrick Allen, 10-month-old Sarah Kathleen and
19-month-old Laura Elizabeth. She was also convicted of manslaughter of 19 day old Caleb Gibson. These murders occurred between 1991 and 1999, finally coming to an end when her husband discovered details of the heinous acts in her personal diary.

Although it is no excuse for her despicable crimes, she did have a tragic childhood. Her biological father, Thomas John Britton, murdered her mother Kathleen (snr) in 1969. He stabbed her 24 times in a violent rage. Folbigg was made a ward of the state and placed into foster care after her father’s arrest. In 1970 she was under the impression that she was adopted Diedre Marlborough, but the truth was that she was always a ward of the state. Life with Marlborough became unbearable and she was forced to leave and school in 1982.

When she was 15 years old, with limited education and resources, Folbigg worked at low-paying jobs to get by. It wasn’t until 1984 that she was made aware that her father had murdered her mother. In a sense it is understandable that this news, at any point in ones life, would have deep psychological effects. In 1987 she married Craig Folbigg, a steelworker and they resided in Mayfield, near Newcastle NSW.

Caleb Gibson Folbigg was born a healthy baby on 1 February 1989. Caleb was diagnosed by a paediatrician as suffering from laryngomalacia (lazy larynx), meaning he would breath rather noisily and it was something he would eventually outgrow. On 20 February 1989, Folbigg stated that she had put Caleb to sleep in a room adjoining her bedroom. She attended to Caleb during the night, hearing him stir around midnight and was restless until 2am. At approximately 2:50am Craig Folbigg was awoken by his wife’s screams.  When he ran to Caleb’s room he saw Kathleen standing over the crib screaming, ‘My baby, something is wrong with my baby’. Caleb was thought to have died of Sudden Infant Death Syndrome (SIDS).

Patrick Allen Folbigg was born on 3 June 1990, another healthy baby. Craig Folbigg took leave from work to help care for his wife and baby for three months after the birth. On 18 October 1990, Folbigg put Patrick to bed. Imagine the utter shock Craig Folbigg felt when he was again woken by the sounds of his wife screaming and to again see his wife standing over their baby's cot. He checked Patrick and noticed the he wasn't breathing and attempted to revive him by cardiopulmonary resuscitation. Patrick was later diagnosed with epilepsy and cortical blindness. On 18 February 1991, Craig Folbigg received a call from his wife, saying ‘It's happened again!’ An autopsy found that little Patrick’s cause of death was an acute asphyxiating event resulting from an epileptic fit.

Following Patrick’s death, the Folbigg’s moved to Thornton, a town northwest of Newcastle.

Sarah Kathleen Folbigg was born on 14 October 1992. All seemed well until the following September when Sarah caught a cold and was having trouble sleeping. By 1:30am the next morning Sarah was dead. Police records states that Craig Folbigg was woken by his wife’s screams and looked up to find her standing in the doorway of their bedroom. When Craig went to check Sarah, she was lying in her bed, motionless. Her death was officially attributed to SIDS.

After Sarahs death the Folbigg’s moved to Singleton in Hunter Valley, north of Newcastle.

Laura Elizabeth Folbigg was born 7 August 1997. Laura was apparently healthy when Folbigg brought her home three days later. Given the history with Folbigg’s other children, Laura’s breathing and sleep patterns were monitored closely for several weeks after her birth, just to be sure. All was well until 19 months later when Laura caught a cold. On 1 March 1999, Folbigg called an ambulance after Laura allegedly stopped
breathing. According to the medical report, two ambulance officers arrived to find Kathleen performing cardiopulmonary resuscitation on her daughter on the kitchen bench. They took over and examined Laura to find that she was not breathing and had no pulse. As before, an autopsy was conducted but, unlike the others, the coroner considered Laura too old to have succumbed to SIDS, recorded her cause of death as undetermined, and ordered a police investigation.

Detective Sergeant Bernard Ryan was assigned to investigate Laura Folbigg’s death. Sadly, cot death is a reality and Ryan could have viewed this case as a just that. But, given the coroners finding, he was thorough enough to consider all the possibilities. Ryan interviewed Kathleen and Craig Folbigg only to learn that Laura was the fourth child to have died in a similar fashion. His suspicions grew.

Kathleen left her husband after Laura’s death and moved abruptly, not taking many of her possessions. Craig was left to clean up her belongings and made an unpleasant discovery. In Kathleen’s bedside drawer he found her diaries. The contents, he later told the
court, made him want to vomit. He immediately took them to the police.

Ryan learned that Kathleen had been keeping diaries most of her life, but had thrown most of them away. Many of her entries are indicative of a woman torn by mixed emotions. She wrote about her wild mood swings and how she watched fish swim in a tank to try and calm herself. She wrote of her innermost fear, that Craig would leave her. An entry on 13 November 1996 indicated the isolation she felt, even from her own
family. Other entries seemed more sinister. She wrote how stress made her do terrible things and spoke of flashes of rage, resentment and hatred toward her children.

One particular entry on 11 June 1997 reads: ‘My brain has too much happening, stored but unrecalled memories just waiting. Heaven help the day they surface and I recall. That will be the day to lock me up and throw away the key. Something I'm sure will happen one day’.

On 21 May 2003, Folbigg was found guilty by the Supreme Court of New South Wales jury of the following crimes: three counts of murder, one count of manslaughter and one count of maliciously inflicting grievous bodily harm. On 24 October 2003, Folbigg was sentenced to 40 years imprisonment with a non-parole period of 30 years. After an appeal on 17 February 2005, the court reduced her sentence to 30 years'
imprisonment with a non-parole period of 25 years on appeal. Due to the nature of her crimes, Folbigg resides in protective custody to prevent possible violence by other inmates.
BACK
© NicHume Photography 2014-2016. Please be advised that copyright is attached to all images taken by Nicole Hume. In plain English, you (or a third party) are not authorised to copy in part or in full, any image for any reason without prior consent. No editing, copying, manipulation by any form of media is authorised, and severe penalties do apply for breaches of the copyright. Please contact me if you require further clarification regarding copyright and use of images.