Dubbed the Black Widow of Richmond, born Marth Charles on the 9th April 1863 on the Murray River in Morgan, South Australia.  Martha was raised in poverty and surrounded in family violence.   Her working life began in domestic service in Port Adelaide where in 1882, she met and married Henry Needle.  She was known to be beautiful, manipulative and ruthless and some even commented that she had mental instability about her.  To the outside world they seemed a happy well matched couple but with the births of their three children, Mabel 1882, Elsy 1883 and May 1886, things changed and Martha was noticed more often than not to venture outside the home unaccompanied by her husband.

Mabel was the first to perish at the hands of Martha.  Mabel had been suffering from fever, vomiting and stomach spasm for a short period of time.  On the 28th of February 1885, Mabel 'seemed to fade' in front of her mothers eyes.  A few months later Henry succumbed to sickness.  The Doctor attended the home to find Henry irritable and not wanting nourishment, he was riddled with hepatitis, enteric fever and exhaustion...in other words his liver and intestines were so inflamed from the poison consumed and lack of food to nourish him back to some level of health.  Henry passed on the 4th October 1889.  Elsie suffered for three weeks with gangrenous stomatitis and exhaustion and died on the 9th December 1890 aged six years.  Little May soon followed and passed away on the 27th August 1891 with suspected tubercular meningitis.  Martha received approximately 120pounds in life insurance.  The majority of this money was used for an elaborate family grave which Martha would often visit.

Louis and Otto Junken hired Martha to be their housekeeper in 1892.  It wasn't long until she sweet talked Otto into an engagement.  Louis was outraged that his brother could become entangled with a woman who exerted extreme temper and frightful outbursts.  Louis fell ill for around two weeks on the 18th August 1893.  Louis consented to the marriage between his brother and Martha and had a miraculous recovery.  He fell ill again in April 1894 and a family member came to aid him back to health but once she left he went down hill fast.  He had violent vomiting fits after unknowingly consuming 'Rough on Rats' in his breakfast served by Martha.  He died May 15th.  Louis and Otto's brother Hermann arrived with their mother to settle Louis' estate and more importantly, contest the relationship between Otto and Martha.  Needless to say it wasn't long until Hermann became ill.  The treating Doctor had sense enough to have a sample of Hermann's vomit forensically tested and the results revealed arsenic poisoning.  Hermann and detectives laid a trap for Martha with Hermann as the bait.  Hermann waited until Matha served him a cup of tea then he blew a whistle sending a barrage of police into the kitchen where they found Martha trying to tip the contents of the cup on the floor.  The cup contained 10 grains of arsenic.

Martha was charged with attempted murder and the investigation began.  The bodies of Louis, Henry, Mabel, Elsy and May were exhumed and all but May tested positive to arsenic poisoning.  All throughout the trial Martha pleaded her innocence but after only four days of hearings and forty minutes of jury deliberation she was found guilty and Supreme Court Justice Hodge sentenced Martha to death.
A newspaper report stated -

"The prisoner received the death sentence with extraodinary calmness.  She walked out the dock unassisted, with firm step and unblanched face"

Martha was executed at Old Melbourne Gaol by hanging at 0800hrs on the 22nd October 1894, aged 30.  Her motives were never revealed but her insanity was evident.  Otto stuck by her side and in her defence stated that "she didn't know what she was doing".
Images by: Nic Hume Photography 2015 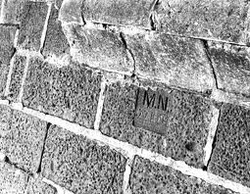 The initial on this bluestone block is 'M.N. 22.10.94' referring to Martha Needle.  The block was originally part of the outer wall of Old Melbourne Gaol which includes the initials and date of execution.  These stones were placed at the head of the graves of those executed in the gaol.  Brighton City Council used the bluestone as part of a sea wall to protect the beaches from erosion.  The wall was built in the 1930s depression and can be found at the foot of Wellington Street.
FROM: Picture Victoria
____________________________________________________

A century after Martha's crimes her neighbourhood became a notorious all over again.  The Pettingill family were a well known crime family.  Drug trafficing, drug dealing, assult, rape and armed robbery listed as convictions.  Eldest son Allen (aka Dr Death) was alleged to have ordered the deaths, or committed the murders himself, of 15 people.  Two other sons were tried and acquitted of the Walsh Street Police killings.

Martha had an older sister Ellen.  Below is what happened with her nephew, Ellen's son, Alexander Newland Lee after being found guilty of murdering Muriel his wife and their three children by poisoning them with strychnine.

“LEE HANGED - The condemned man Alexander Newland Lee who was sentenced to death for the murder of his wife and three children was hanged at the Adelaide Gaol at 8 o’clock on Thursday morning. The Rev. W.H. Stanton [Lee’s spiritual adviser] said that the doomed man made no statement. The execution was entirely of a private nature, and only officials required to attend were present. Death was instantaneous. Lee maintained a calm demeanour to the end. He walked erect to the drop, turned to a warder and exclaimed “Good-bye Jim.” He met his death unflinchingly."
BACK
© NicHume Photography 2014-2016. Please be advised that copyright is attached to all images taken by Nicole Hume. In plain English, you (or a third party) are not authorised to copy in part or in full, any image for any reason without prior consent. No editing, copying, manipulation by any form of media is authorised, and severe penalties do apply for breaches of the copyright. Please contact me if you require further clarification regarding copyright and use of images.